Stop Old Trains from Transporting Oil: Send a Message to the DOT Today 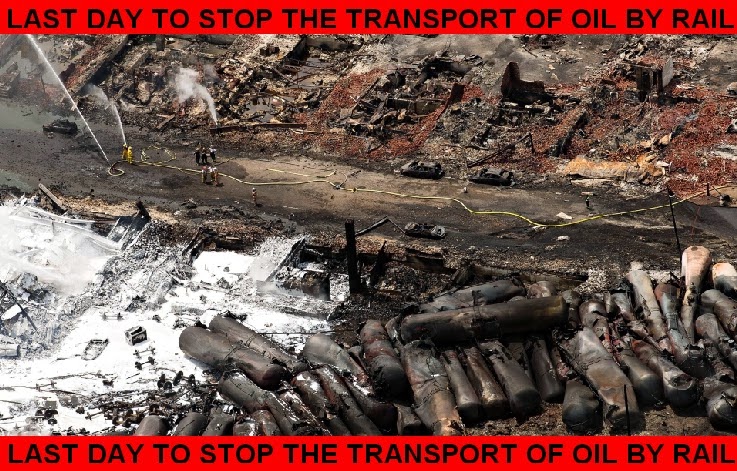 This is the last day to tell the Department of Transportation to regulate the use of aging rail cars to ferry climate destroying fossil fuels. Right now almost a million barrels of oil per day are being transported by rail in the US and this is on the increase. This is a dangerous practice that costs lives and cannot be allowed to continue.

The Department of Transportation (DOT) is asking for public comments to help them improve oil-by-rail safety. The OilChange is seeking to put an end to this dangerous and all too common practice with a simple message for the DOT (see below).


The old rail cars that are increasingly being used to transport oil “are prone to explode catastrophically when derailed.” This point was tragically illustrated earlier this year by events that leveled the town of Lac-Megantic, Canada, and killed 47 people. Recently in Alabama another incident occurred in which a derailment caused a massive explosion. Thankfully nobody was hurt in this latest rail explosion, however, the point is clear, transporting oil with old rail cars is a deadly undertaking.

One of the most important things that can be done to improve fossil fuel transportation is to encourage the DOT to outlaw the use of the dangerous tanker car known as the DOT-111. Replacing these cars with safer alternatives will be an expensive proposition. Driving up the transportation costs of oil will serve to reduce consumption and enhance the relative value of safer and cleaner forms of energy. Most importantly it will help to protect our communities from the dangers of transporting fossil fuel by rail.

OilChange also outlines several other steps that can be taken to improve safety including better notification for communities at risk and putting two engineers on trains transporting oil.

Add your voice and OilChange will deliver your letter along with thousands more directly to the DOT by the December 5th deadline.

Here is the OilChange message for the DOT:

Please accept the following strategies to improve rail car construction and operations to protect our communities from the risks associated with transporting crude oil and tar sands by rail:

1. Old and outdated tank cars (e.g. the DOT-111 that carry crude oil and tar sands) should be removed from the rails before it’s too late. An immediate ban on the use of DOT-111 cars, or other inferior cars, is preferable to a lengthy phase-out that leaves communities at risk.

2. Emergency responders, local governments, and the public deserve to know when we are being put at risk. Please notify rail communities that are likely to see major increases in crude transport because of the many new proposed terminals around the United States.

3. DOT-111s puncture even during slow speed accidents; as long as DOT-111s remain in use, there should be sensible speed limits for any train that uses them.

4. Volatile tanker cars should not transit population centers during peak times for train/automobile interactions or when potentially impacted parties (schools, churches, concert venues) are likely to host large numbers of people within a potential blast zone.

5. Trains aren’t safe when operated by just one engineer. Trains should be required to have two operators, provide sleeping facilities for engineers, and have automatic brakes (dead-man switches) to prevent roll away accidents.

Webinar – Health and Equity in Action: A Case Study On How Atlanta-Based Colleges & Universities Are Benefiting Their Communities

The Winner of the Solar Decathlon 2013

The Winner of the Solar Decathlon 2013