Researchers Discover the Most Potent GHG Known to Man 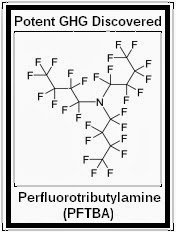 Researchers have discovered the most destructive anthropogenic greenhouse gas (GHG) known to man.  The molecule known as perfluorotributylamine (PFTBA) can stay in the atmosphere for up to 500 hundred. According to research published in the Geophysical Research Letters on November 27th 2013, PFTBA was discovered by researchers at the University of Toronto.

Five U of T chemists developed a method of testing the air using a special chamber. The chemical was first used in the mid-1900s in electrical equipment and continues to be used for electronic testing and in heat transfer agents.

While carbon dioxide (CO2) is the most common GHG, its atmospheric life
span is dwarfed by PFTBA which is a 7,100 times more potent climate
change causing molecule than CO2. The researchers found an average of
0.18 parts per trillion of PFTBA in the Toronto air samples. There are
around 400 parts per million of atmospheric carbon.

While their is far less PFTBA in the atmosphere than CO2, it is far more
potent. The combination of its long life and the finding that PFTBA is
the most radiative efficient chemical ever found, make it the most
destructive GHG known to man.

What is even more disconcerting is the possibility that there may be other similarly destructive undiscovered compounds in the atmosphere. “There may be similar compounds out there that have yet to be discovered,” said Angela Hong, a PhD student who helped research the new study

While only a few companies still produce PFTBA, there are currently no rules or regulations for the manufacture or use of PFTBA. Sadly political leaderships are slow to embrace such research findings. “The science really isn’t informing the policy,” Hong said. “Until now, maybe. We’ll see.”