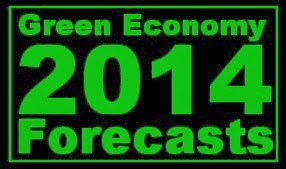 While
the overall outlook is good, there is a mixed bag of trends,
predictions and problems that will directly impact sustainability,
renewable energy, greenbuilding and cleantech in 2014.

A total of 70 percent of respondents predicted that water will emerge
as the top sustainability initiative in 2014. The report indicates that
water is percieved as a significant opportunity for savings and
improvement. The survey states that water concerns are second only to
energy. Ford’s 2014 Trend’s Report
concurs with the Ecova assessment that water will be the priority issue
this year as does a Credit Suisse report titled Water: The Next
Challenge.

The Ecova report also states that benchmarking regulations will
contribute to an increasingly complex environment. However, it further
indicates that peer benchmarking is another area where there are
opportunities to capture additional costs and energy savings.

While there is both good and bad news for the U.S. renewable energy
industry in 2014, overall, the skyward trend continues. As reported in Renewable Energy World,
on December 20 Credit Suisse released a highly favorable report that
predicted unprecedented growth for renewable energy in the U.S.

They attribute their bullish forecasts to a combination of state
Renewable Portfolio Standards (RPS) and cost competitiveness of
renewables when compared to conventional power generation including
natural gas. Their report predicts that renewable energy will meet 85
percent of future power demand growth through 2025. This translates to a
forecast of 100 GW of new renewable capacity with wind and solar market
share more than doubling from 2012 to 2025, accounting for
approximately 12 percent of US electricity generation.

Despite these positive predictions for renewable energy, a new report called America’s Power Plan
points to problems associated with outdated utility business models in
the U.S. As it stands now, utilities are being rewarded for building and
maintaining fossil-fuel plants and this is having a deleterious effect
on U.S. renewable energy. The report suggests that these problems can be
addressed with the right shift in policy.

George Danner of the Business Laboratory indicated that he is concerned about the fact that electric
utility companies use dated models to predict demand. While Brian
MacCleery, Principal Product Manager, Clean Energy Technology, National
Instruments, believes it’s time to reward utilities for switching to
renewable energy.

At utility scale power levels, economies of scale have driven down
the cost of solar. Due in part to these price declines, the Credit
Suisse report anticipates that U.S. solar will increase 11 times and
account for 20 percent of the growth in renewable energy between 2012
and 2025. Higher efficiency and the declining price of technology has
brought solar into the range of price parity with natural gas. The costs
of solar are expected to continue falling for the next several years.

The Credit Suisse report projects that wind power will double and
account for about 80 percent of U.S. renewable energy growth from 2012
to 2025. Wind energy is becoming much less expensive and much more
effective at harnessing power and making electricity.

One of the unknowns that will directly impact the future
of renewables in the U.S. is the fate of the Production Tax Credit
(PTC), which expired at the end of 2013. It remains to be seen what
Congress will do when it resumes in January. It is important to note
that the PTC has been allowed to expire only to be subsequently
resurrected many times in the past.

Green building in North America will continue its strong growth in 2014. This is but one of a number of predictions made by Jerry Yudelson,
an author and leading green building consultant. He attributes this
growth to the confluence of commercial real estate construction along
with government, university, nonprofit and school construction.

In 2014, the focus will increasingly be on the greening of existing
buildings. He anticipates that we will see growing interest in energy
efficiency in all types of buildings involving automation for energy
efficiency using cloud-based systems. He calls 2014, “The Year of the
Cloud.”

He sees zero-net-energy buildings as the next logical step for
building design and development. He further predicts that there will be
much more competition for LEED, including the Green Globes rating system
offered by the Green Building Initiative.

Other trends that he predicts will continue are Green Building
performance and disclosure, healthy building products, disclosures and
declarations as well as “Red Lists” of chemicals of concern. Solar power
use in buildings will also continue to grow alongside water awareness
and conservation.

Cleantech is expected to do well in 2014. This is due to a broad
cleantech recovery and the rise of crowdfunding. However, electric
vehicles may not perform as well as many had hoped and there are some
surprises in store for the rare earth elements (REEs) industry. These
are some of the salient predictions from cleantech guru Dallas Kachan,
managing partner of Kachan & Co., a cleantech research and advisory
firm.

Despite some speculation to the contrary, Kachan believes the term
“cleantech” will remain through 2013. He succinctly defines cleantech as
shorthand for environmental and efficiency-related technology
innovation.

The forecasts offered by Kachan & Co.’s 2014 cleantech predictions
are far more optimistic than last year’s assessment or the year before.
In 2014, they see an overall upward trend in metrics like corporate,
private equity and family office investment, venture debt, project
finance, mergers and acquisitions, and new innovation.

While Kachan is bullish about cleantech, he is downright negative
about electric vehicles (EVs) for 2014. He anticipates
slower-than-expected growth of EVs due to improving efficiency
innovations for the internal combustion engine and fuel cell vehicles.

Kachan further predicts that REEs will not generate the huge returns
that some had anticipated. He also suggests that this will be due to
growth in REEs recycling in 2014.

Kachan’s optimistic assessment is in part derived from an earlier report
which compares investments in cleantech with other technology booms.
Whether we are talking about dot coms, networking, biotech or the PC,
there are parrallels that bode well for the future of cleantech. In all
of these technological revolutions there were periods of rapid growth
that ultimately gave way to corrections, after which we saw more stable
growth. This appears to be where cleantech is at in 2014.

As explained in the Kachen report, “we believe the world turned an important corner in cleantech in 2013.”

Related Posts
GMO’s Top Sustainability and Green Economy Stories of 2013
Economic Benefits of Going from Brown to Green in Europe
Environmental Implications of Three Types of Economies: Brown, Blue and Green
Should Green Apply to the Brown Economy?
Primer on Four Economic Systems and their Environmental Implications
Video – George Soros Says We Need to Rethink Economic Theory
British PM Says Investment in the Green Economy is a Competitive Necessity
Global Risks Report 2013: Interconnectedness of the Economy and the Environment
New Support for the Interconnectedness of the Environment and the Economy
The Economics of Ecosystems and Biodiversity
Climate Change Highlighted at the WEF in Davos (2013)
WEF Global Risks Report 2013
The Green Economy is the Right Solution for our Troubled Times
Greentech and Renewables Help the Economy and Create Jobs