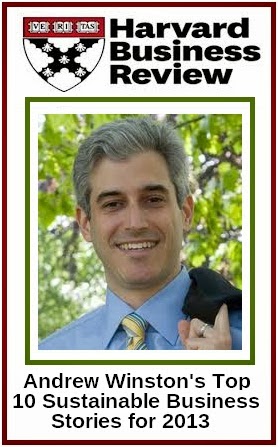 Andrew Winston has been providing a top ten list of sustainable business stories for the last four years. He is the co-author of the best-seller Green to Gold and the author of Green Recovery. His forthcoming book, The Big Pivot, will be released in April. He advises some of the world’s biggest companies on environmental strategy. Here is his list of the top ten sustainable business stories for 2013.

This year, like recent years, saw some continuation of big trends: with a few exceptions, the international policy community keeps failing to come to a meaningful agreement on climate change; carbon emissions just keep rising; transparency is increasingly unavoidable and keeps gaining technology-enabled traction; pressure from big companies on their suppliers keeps going up.

So what’s really new this year? Let’s dive in.

1. The science of climate change gets clearer: the IPCC lowers our carbon “budget.”

The Intergovernmental Panel on Climate Change (IPCC) issued its wonky, but readable, Summary for Policymakers (a precursor to the full 2014 report). The report expresses “near certainty” that humans are causing climate change and calculates how much more carbon we can “safely” put in the atmosphere and hold to the 2-degree warming threshold that the world’s leaders have agreed to (and some scientists are suggesting that even the 2-degree threshold is too high).

The short story is that we have less room than before. PwC’s annual Low Carbon Economy Index report concluded that we must lower global carbon intensity (the amount of carbon produced for every dollar of GDP) by 6% per year until 2100, a percentage point lower than last year’s report recommended. On the upside, similar calculations from WWF and McKinsey suggests that this pace of change –they endorse a 3% reduction in absolute emissions per year through 2020 – will actually be very profitable.

2. The reality of climate change and pollution get scarier: Australian heat, Philippine devastation, and Chinese air pollution all break records.

The models and carbon budgets aside, the weather this year got even more extreme, helping make the case for action in a more visceral way. In January, Australia’s meteorologists had to add new colors to weather maps to deal with temperatures ranging up to 54 degrees Celsius (129 degrees Fahrenheit). And in November, after the Philippines faced the most powerful storm ever recorded to hit land, some climatologists suggested we add a “Category 6” to the top end of the storm scale.

While it’s impossible to tie any single weather event to climate change, the complicated correlation got clearer this year. The National Oceanic and Atmospheric Administration concluded that “high temperatures, such as those experienced in the U.S. in 2012, are now likely to occur four times as frequently due to ­human-induced climate change.”

In parallel, China’s air became, at times, dangerous and unbreathable. Several cities experienced days with small-particle air pollution running 25 to 40 times higher than the World Health Organization’s recommended limit. This may seem like a regional story, but it has global ramifications for manufacturing, consumer goods, the energy industry, and much more. The world’s most populous country is taking increasingly drastic action, such as slashing Beijing’s new sales quota for cars by 40%.

In October, 99% of the new energy added to the grid in the U.S. came from renewables (solar alone was 72%). Germany keeps breaking its own records, with wind and solar providing 59% of the country’s energy one sunny day in October. And America’s wind power has quadrupled over the last 5 years; wind is now generating enough electricity to power the state of Georgia.

In addition, electric and hybrid cars are about 4% of US auto sales now, a doubling of market share in the last couple of years. Companies are increasing investments as well. Walmart, already the largest private sector buyer of solar power in the US (with more solar capacity than 38 U.S. states), committed to a 600% increase in renewable energy by 2020.

4. Deep concerns about labor conditions, wages, and equity take root: From tragedies in Bangladeshi apparel factories to minimum wages in the U.S.

Travesties like the death of more than 1100 workers at the Rana Plaza apparel factory in Bangladesh are increasingly unacceptable to the buying public. And it’s getting harder to hide how connected we all are to these workers. When the news hit about the loss of life, front pages around the world included the names of major brands that depended on the factory to make their goods. A startup called Labor Voices is now collecting information on working conditions in Bangladesh and elsewhere in a shockingly simple way: by giving workers a number to call from their cell phones, which everybody now has.

European companies are doing more than U.S. peers, at least publicly, to commit to higher safety standards. Swedish retailer H&M recently said it would pay a “living wage” to 850,000 workers in its supply chain by 2018 – a somewhat vague, but important announcement. And to be fair, while U.S. companies haven’t been as clear, Walmart has contracted with Labor Voices to gather data on its 300+ Bangladeshi suppliers and subcontractors.

On the other side of the ocean, though, Walmart, McDonald’s, and many others are facing increasing challenges about minimum wages. Watch this space, as it seems unlikely that this debate will go away.

5. Food and food waste gets more attention, debate, and innovation: Can cows save the world, or should we make meat in labs?

The level of concern about how we’re going to feed 9 billion people by 2050 is rising. Food waste also got more attention: a UN report estimated that the world throws out $750 billion worth of food annually. Food is too big a topic to summarize, but a few stories grabbed my eye this year. Fenugreen, a smart startup that won the Sustainable Brands Innovation Open in June, sells sheets of paper made with natural ingredients that fight food decay – they can keep fruit and veggies from going bad 2 to 4 times longer than they would last normally.

On a different front, Biologist Allen Savory made a splash with a much viewed TED talk about how grazing cattle in a way that fertilizes land and sequesters carbon can fight desertification and climate change. His theory is under attack, at least to the extent that his method could make a significant dent in our climate problem. Wherever the science on this ends up, it’s an important discussion that brings more focus to systems thinking and to the nexus of food, energy, and water. Finally, a quirky, totally different meat story was fascinating. Billionaires Bill Gates and Sergey Brin are funding experiments to grow meat in labs, a process that – once people get past any “ick” factor – could greatly reduce the footprint of producing meat-based protein.

What Companies Are Doing

6. (Some) businesses get off the sidelines in the climate policy fight: Hundreds of companies sign onto the Climate Declaration.

Started by the NGO Ceres, as part of its Business for Innovative Climate & Energy Policy (BICEP) initiative, the Climate Declaration is a broad statement of intent that acting on climate will be good for our economy and society. A large range of leading companies have signed on including Diageo, ebay, EMC, Gap, GM, IKEA, Intel, Microsoft, Nestle, Nike, Portland Trailblazers, Starbucks, Swiss Re, Unilever, and many more. The Declaration itself is directional and not as specific as what Ceres and a subset of these signatories advocate for as part of BICEP’s work (like pricing carbon and aggressive energy efficiency programs). But it’s a very good start and demonstrates that the business community is not against tackling climate change.

In related news, Accenture produced a fascinating survey of 1000 CEOs around the world, in which a surprising 83% agreed that government should play a critical role in enabling the private sector to advance sustainability. And 31% even supported “intervention through taxation.” In a world where business generally fights all regulations and government interventions, it’s astonishing that one third of global CEOs basically said, “tax us.”

7. Companies are aiming higher, for themselves and their partners: Dell, Coca-Cola, Lego, and many more set very aggressive environmental and social goals.

Goals are not the same as outcomes but they matter a lot – they set the bar within sectors, driving competition and performance. As part of its 2020 Legacy of Good Plan, Dell said that it’s aiming to get a 10-fold multiple of good (reduced footprint, for example) from its technologies versus the impacts of making them (mimicking BT’s earlier 3:1 “Net Good” goal). More specifically, the company pledged to reduce its greenhouse gases by 50% and product energy intensity by 80%.

Coca-Cola launched its own 2020 goals including reducing value chain carbon emissions by 25% (per drink), recovering 75% of bottles and cans, and replenishing 100% of the water the company uses. And Lego just announced its intention to use 100% renewable energy by 2016. A few companies have already made incredible progress, including Diageo, which, I reported earlier this year, cut its North American GHG emissions by nearly 80%.

In fact, 75% of the world’s largest companies now have multiple environmental and social goals in place (see my new website, http://www.pivotgoals.com, a searchable database of 2500 environmental and social goals set by the world’s largest companies). In addition, my research shows that more than 50 of the top 200 companies have even set carbon goals in line with PwC’s 6% per year reduction recommendation.

A few companies have begun to extend their goals to their suppliers, a form of what I’m calling “de facto regulation.” Walmart is phasing out 10 toxic chemicals in the products on its shelves, and HP set a carbon reduction goal of 20% for its supply chain.

But what’s surprising is Unilever’s rank — for a company not nearly as well known as the others, it came in just behind two of the hottest, most valuable companies in the world, and ahead of much better known brands like Disney, Nike, and Coca-Cola. Executives at Unilever credit their ranking to the company’s known leadership on sustainability. It’s hard to argue the point.

LAUNCH is an initiative to identify and accelerate innovations that help solve global problems with water, health, energy, waste, and systems. This program is new so it’s unclear what the impact will be, but it’s an interesting and indicative story for two reasons. First, look at the partners — what a weird, wonderful mix of business, government, and scientific organizations. Second, the goal is really systems change, and if we’re going to solve the mega challenges in our midst, we need to work across value chains and traditional lines.

The Sustainability Accounting Standards Board has been plugging away, drawing together executives from the world’s largest companies to develop the right sets of questions – specific to each sector – that will help leaders identify which environmental and social issues are really material to their business. We’re very early in this journey, but SASB produced the first set of guidelines for one sector (health care). Watch this space.

So it’s been a mixed year, as I suppose all years are, but I remain optimistic that greater stories of change are coming. Have a very happy, healthy, and sustainable 2014!

Andrew Winston’s Sustainable Business Questions for 2014 and Beyond

Andrew Winston's Sustainable Business Questions for 2014 and Beyond