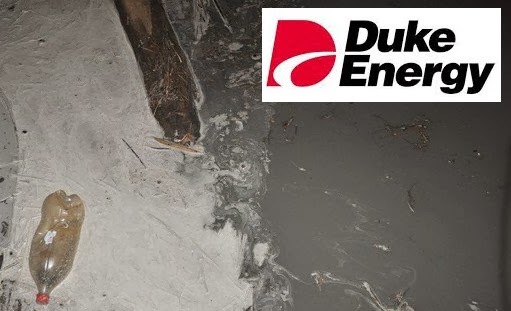 At around 4 PM on Monday February 3, Duke Energy first reported a massive coal ash spill. The company said that between 50,000 and 82,000 tons of coal ash and up to 27 million gallons of water is spilling in the Dan River. The spill is emanating from a broken storm pipe that is connected to a 27 acres ash pond at its retired power plant in Eden, North Carolina. The coal ash pond was built in 1956 and can hold around 155 million gallons of water. A security guard first spotted the unusually low water level in the ash pond at about 2 PM on Sunday. Duke waited more than 24 hours before reporting the spill.


Ash is visible on the banks of the Dan River, and the water has a grey tint to it. The people in Danville, Virgina, are concerned as they draw their water from the Dan River which is located only 6 miles downstream from the spill. The Dan River plant is about 130 miles northeast of Charlotte near the Virginia line.

Coal ash is waste left after burning coal that contains arsenic, mercury, lead, and over a dozen other heavy metals, many of which are toxic. Groundwater contamination has been found around all 14 of its unlined ash ponds. Duke Energy has already been sued by the state for their coal ash dump sites in North Carolina. Lawsuits are attempting to force Duke and other utilities to remove ash stored near waterways.

If the preliminary estimates are accurate, this will be the third-largest coal ash spill in US history. In 2008, a one billion gallon spill of ash slurry at a power plant in Tennessee sparked a national debate over coal ash.

A 2009 inspection and report of the Dan River site for the Environmental Protection Agency noted some seepage and said it has “significant hazard potential.” It recommended a stability study on the structure’s river side.

The state Department of Environment and Natural Resources is investigating and helping with the cleanup. The EPA is scheduled to announce the first federal rules on ash-handling by December, 2014.

The Paradox of President Obama's All of the Above Energy Strategy