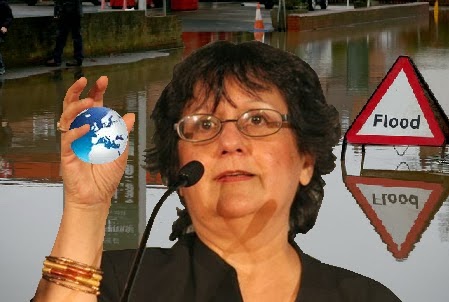 Although weather related calamity has proven devastating to the UK, there may be an upside to the unprecedented flooding. Politicians and people who were previously disinterested in climate change in the UK are increasingly being forced to reckon with reality.

As explained in an Independent article by Yasmin Alibhai Brown, a Ugandan-born British journalist and author:


“I had started thinking more deeply about the planet and human recklessness. Then came this washed-out winter. Shock and awe have been followed by buckets of guilt. Guilt is good if it leads to personal and political reappraisals and candour. Something seriously bad is happening to climate patterns all around the world. Typhoons, droughts, flood and famines have destroyed parts of our beautiful planet.”

She makes the point that while climate disasters like Typhoon Haiyan received a lot of coverage and garnered the empathy of many in the UK, these floods have convincingly drove the point home.

“But all that was happening out there, to other folk, often dusky and wretched, those who have been thought of as the flotsam and jetsam of humanity, perpetually needy” Brown remarked. “Questions were asked if such catastrophes were getting more frequent, ferocious and were partly man-made? Those have become urgent as our isles deal with fierce weather onslaughts on people and places.”

Even climate deniers are being forced to reconsider their dogmatic insistence that global warming is a ruse.

“Surely most obstreperous refuseniks feel duty-bound to rethink orthodoxies, beliefs, behaviours, policies and biases? Some clearly can’t or won’t. Though most sceptics have been spookily silent recently” Brown noted. “Their contemptuous disregard for facts and evidence-based theories should make them irrelevant. But the media just loves some mavericks and so they get to sound off and confuse the people, especially the undecided.”

Brown concludes by stating that the torrential rains, wind and resultant flooding may represent a turning point for the UK.

“After these storms, one hopes, Britons will listen less to these ideologically driven, right-wing refuters… After this transformative winter, nothing can be as it was,” Brown said.

The ideology of the political right deplores government, but even they are being forced to acknowledge that governments have a crucial role to play in mitigating and adapting to the climate crisis.

White Paper – A Journey in Search of Capitalism 2.0: Blueprints for a Sustainable Economy