Secretary of State Kerry: Climate Change is a Catastrophic Threat 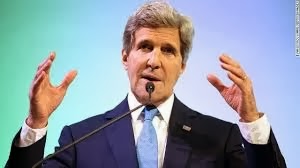 Secretary of State John Kerry gave a speech in Indonesia on Sunday February 16. In this speech he made some of his most powerful statements to date about the threat posed by climate change.

Here are some highlights from his speech in Jakarta:

It’s not an exaggeration to say to you that the entire way of life that you live and love is at risk.


[In 1992]…Maurice Strong…told us: “Every bit of evidence I’ve seen persuades me that we are on a course leading to tragedy.”

When I think about the array of global climate – of global threats – think about this: terrorism, epidemics, poverty, the proliferation of weapons of mass destruction – all challenges that know no borders – the reality is that climate change ranks right up there with every single one of them.

And the reason is simple: The science of climate change is leaping out at us like a scene from a 3D movie. It’s warning us; it’s compelling us to act. And let there be no doubt in anybody’s mind that the science is absolutely certain. It’s something that we understand with absolute assurance of the veracity of that science. No one disputes some of the facts about it.

So when thousands of the world’s leading scientists and five reports over a long period of time with thousands of scientists contributing to those reports – when they tell us over and over again that our climate is changing, that it is happening faster than they ever predicted, ever in recorded history, and when they tell us that we humans are the significant cause, let me tell you something: We need to listen.

When 97 percent of scientists agree on anything, we need to listen, and we need to respond.

Well, 97 percent of climate scientists have confirmed that climate change is happening and that human activity is responsible. These scientists agree on the causes of these changes and they agree on the potential effects. They agree that the emission of greenhouse gases like carbon dioxide contributes heavily to climate change. They agree that the energy sources that we’ve relied on for decades to fuel our cars and to heat our homes or to air condition our homes, to – all the things that provide us electricity like oil and coal – that these are largely responsible for sending those greenhouse gases up into the atmosphere. And the scientists agree that emissions coming from deforestation and from agriculture can also send enormous quantities of carbon pollution into our atmosphere.

And they agree that, if we continue to go down the same path that we are going down today, the world as we know it will change – and it will change dramatically for the worse.

And the results of our human activity are clear. If you ranked all the years in recorded history by average temperature, you’d see that 8 of the 10 hottest years have all happened within the last 10 years.

And because the earth is getting hotter at such an alarming speed, glaciers in places like the Arctic are melting into the sea faster than we expected. And the sea is rising

Now, climate change also tragically means the end of some species. The changing sea temperature and the increasing amount of acidity – the acidity comes from coal-fired power plants and from the pollution, and when the rain falls the rain spills the acidity into the ocean. And it means that certain species of fish like cod or sardines can no longer live where they once lived. This is devastating for the world’s fisheries.

Climate change also means water shortages. And if you have these enormous water shortages, then you have a change in the weather – because of the weather patterns, you’re going to wind up with droughts, the lack of water. And the droughts can become longer and more intense. In fact, this isn’t something around the corner – this is happening now.

We are seeing record droughts right now, and they’re already putting a strain on water resources around the world. We’ve already seen in various parts of the world – in Africa, for instance – people fighting each other over water, and we’ve seen more conflicts shaping up now over the limits of water. Back in the United States, President Obama just the other day visited California, where millions of people are now experiencing the 13th month of the worst drought the state has seen in 500 years. And no relief is in sight. What used to be a 100-year or a 500-year event is now repeating itself within 10 years.

Furthermore, climate change means fundamental transformations in agriculture worldwide. Scientists predict that, in some places, heat waves and water shortages will make it much more difficult for farmers to be able to grow the regular things we grow, like wheat or corn or rice. And obviously, it’s not only farmers who will suffer here – it’s the millions of people who depend on those crops that the farmers grow. For example, the British government research showed that climate change may have contributed to the famine that killed as many as 100,000 people in Somalia just back in 2010 and 2011.

On top of the unspeakable humanitarian toll, the economic cost that follows a storm like that is absolutely massive…So it’s not just about agriculture – it’s also about technology. It’s about our global economy. It’s about potentially catastrophic effects on the global supply chain.

Now, despite all of these realities – despite these facts – much of the world still doesn’t see or want to see the need to pursue a significant response to this threat.

one of the most catastrophic, grave threats in the history of human life.

The window of time is still open for us to be able to manage this threat. But the window is closing… We just don’t have time to let a few loud interests groups hijack the climate conversation…I’m talking about big companies that like it the way it is that don’t want to change, and spend a lot of money to keep you and me and everybody from doing what we know we need to do.

First and foremost, we should not allow a tiny minority of shoddy scientists and science and extreme ideologues to compete with scientific fact. Nor should we allow any room for those who think that the costs associated with doing the right thing outweigh the benefits. There are people who say, “Oh, it’s too expensive, we can’t do this.” No. No, folks. We certainly should not allow more time to be wasted by those who want to sit around debating whose responsibility it is to deal with this threat, while we come closer and closer to the point of no return.

I have to tell you, this is really not a normal kind of difference of opinion between people. Sometimes you can have a reasonable argument and a reasonable disagreement over an opinion you may have. This is not opinion. This is about facts. This is about science. The science is unequivocal. And those who refuse to believe it are simply burying their heads in the sand.

…Obama and I believe very deeply that we do not have time for a meeting anywhere of the Flat Earth Society. One of the arguments that we do hear is that it’s going to be too expensive to be able to address climate change. I have to tell you, that assertion could not be less grounded in fact. In fact, it’s exactly the opposite. Serious analysts understand that the costs of doing nothing far outweigh the costs of investing in solutions now. You do not need a degree in economics or a graduate degree in business in order to understand that the cost of flooding, the cost of drought, the cost of famine, the cost of health care, the cost of addressing this challenge is simply far less – the costs of addressing this challenge are far less than the costs of doing nothing. Just look at the most recent analysis done by the World Bank, which estimates that by 2050, losses – excuse me one second – losses from flood damage in Asian ports – fishing ports, shipping ports – the losses in those ports alone could exceed $1 trillion annually unless we make big changes to the infrastructure of those ports.

It’s everyone’s responsibility. Now certainly some countries – and I will say this very clearly, some countries, including the United States, contribute more to the problem and therefore we have an obligation to contribute more to the solution. I agree with that. But, ultimately, every nation on Earth has a responsibility to do its part if we have any hope of leaving our future generations the safe and healthy planet that they deserve.

The fact is that climate change, if left unchecked, will wipe out many more communities from the face of the earth. And that is unacceptable under any circumstances – but is even more unacceptable because we know what we can do and need to do in order to deal with this challenge.

…climate change isn’t only a challenge. It’s not only a burden. It also presents one of the greatest economic opportunities of all time.

I am absolutely confident that if we choose to, we will meet this challenge…Human ingenuity has long proven its ability to solve seemingly insurmountable challenges. It is not a lack of ability that is a problem. It is a lack of political resolve that is standing in our way. And I will tell you as somebody who ran for elected office, when you hear from the people, when the people make it clear what they want and what they think they need, then people in politics respond.

Today I call on all of you in Indonesia and concerned citizens around the world to demand the resolve that is necessary from your leaders. Speak out. Make climate change an issue that no public official can ignore for another day. Make a transition towards clean energy the only plan that you are willing to accept.

And if we come together now, we can not only meet the challenge, we can create jobs and economic growth in every corner of the globe. We can clean up the air, we can improve the health of people, we can have greater security; we can make our neighborhoods healthier places to live; we can help ensure that farmers and fishers can still make a sustainable living and feed our communities; and we can avoid disputes and even entire wars over oil, water, and other limited resources. We can make good on the moral responsibility we all have to leave future generations with a planet that is clean and healthy and sustainable for the future.

we can meet this challenge, the greatest challenge of our generation, and we can create the future that everybody dreams of.

Thank you all very much for letting me be with you. Thank you.

Refuting the Rationale for Approving the Keystone XL