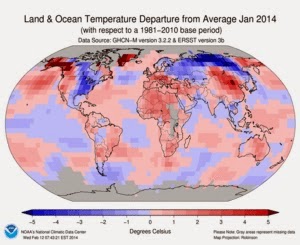 While climate deniers love to point to cold weather as evidence that global warming is a farce. The data indicates that despite the polar vortex and the associated colder temperatures, we are still experiencing some of the warmest weather on record. According to the NOAA January 2014 was one of the hottest months ever recorded both on land and at sea.

Related
Extreme Cold in North America is due to Stratospheric Warming

Secretary of State Kerry: Climate Change is a Catastrophic Threat
What We Learned about Climate Change in 2013
NASA’s MAVEN to Explore Climate Change on Mars
Its Going to Get Even Hotter than Predicted by Climate Models According to a New Cloud Study
Global Warming Predictions for 2014 and Beyond
Video – A Brief History of Anthropogenic Climate Change