Impediments to Women in the Workforce Inhibit Environmental Action 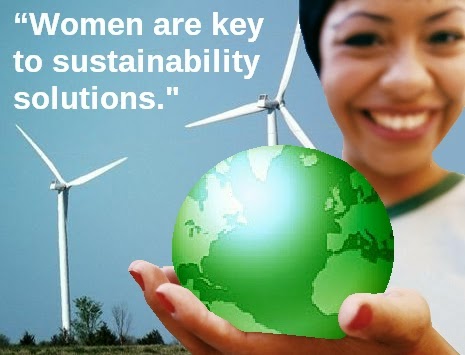 Decreasing barriers to women in the workplace can shift the balance of power and help us to move forward on a host
of sustainability issues.

Women’s Day was celebrated on March 8, so this is an opportune time to review the importance of women to the health of the planet. While women represent roughly half of the population, they have yet to assume
their rightful role at the highest levels of decision-making. We have good reason to believe that as the power of women grows, they will be a civilizing force in business. There are a number of female environmentalists who have played pivotal roles over the years. There are also a number of studies that show that women are better for the environment than their male counterparts. Women’s organizations are actively involved in efforts to combat environmental degradation and climate change in particular.  One such organization is WECAN. According to a recent WECAN publication, women are disproportionately impacted by climate change.

“Women make up 20 of the 26 million estimated refugees displaced by climate change, comprising 80 percent of the world’s climate refugees.” The implication
here is that those most impacted by a warming world may be better change agents than their male counterparts.

Women are not only adversely impacted by the problems associated with climate change, they are also an integral part of the solution.  As WECAN states:

“[W]omen are key to sustainability solutions. It is women who are responsible
for food production and the collection of water and fuel wood, which makes them
particularly aware of changing weather patterns that alter growing seasons,
decreasing crop yields and decreasing water levels.  This knowledge is essential
to adaption and mitigation strategies. Women in North America determine 80
percent of all consumer purchases. That market power could be mobilized to
significantly reduce carbon emissions through purchasing choices, including
demanding an end to fossil fuels and a radical increase in renewable
energy.”

On February 14, 2014, WECAN held a day of action for women and climate justice highlighting women’s leadership in climate solutions. Here are some of the actions taken for this event:

They also staged the International Women’s Earth and Climate Summit in September of 2013 in New York. Through WECAN’s Online Solutions Forum, where more than 25 countries provided advocacy and on-the-ground solutions for climate change and environmental crises.

Women and the Green Economy (WAGE) is another important organization. WAGE was launched at the UNFCCC 16th Conference of the Parties in Cancun, Mexico in December 2010. WAGE helps women to aggregate their power and promote leadership in the creation of a sustainable green economy.

Women are getting involved with the nuts and bolts of renewable energy construction. Thanks to support from groups like Women of Wind Energy (WoWE), Meredith MacDonald is but one example of a woman who pursued her dream to work on the construction of wind turbines.

There are also many great examples of women who have played important roles in driving sustainability forward. One such woman is Marlys Appleton, CEO of the metals recycling company Avtaar America and an early champion of sustainability risk management.

Sadly, women like MacDonald and Appleton are far too rare. Part of the blame must fall on a culture that impedes the progress of women in the workplace.

Women in the workforce

As reported by Triple Pundit, women account for over 50 percent of college graduates and they have $8 trillion of annual buying power, however, they still account for less than 15 percent of S&P 500 boards of directors. Almost one-third (30 percent) of midsize companies have no women on their board of directors. In most companies, women are a minority and they certainly are a minority in leadership positions.

As reviewed in a recent study in The Shriver Report titled,  “A Woman’s Nation Pushes Back from the Brink,” there are still a number of challenges faced by women face in the US workforce.

Although there are now some high-profile women who have attained the position of CEO, working women still have to deal with a significant wage and career gap.  This makes it far harder for women to achieve positions of power from which they could auger change.

In addition to being under-represented in positions of power, women are over-represented in the ranks of low-wage earners. Women still take home between 9 and 30 percent less than men for similar jobs.  Women also have fewer opportunities for career growth. While companies may hire women, they are less frequently promoted to leadership positions. The irony here is that promoting women into leadership positions has been shown to be in the best interest of employers and shareholders. The research shows that when women lead, businesses perform.

On almost every measurable indice, companies with the highest percentages of women board directors significantly outperformed those with the least. Despite these findings, as of 2013, women held only 16.9 percent of corporate board seats, only 14.6 percent of Executive Officer positions, and only 8.1 percent of top-earner slots.

Women are especially good for advancing sustainability. This is the finding in research conducted by Kellie McElhaney, the Whitehead Faculty Fellow in Corporate Sustainability for the Haas School of Business at the University of California, Berkeley and Sanaz Mobasserir, and a Ph.D. candidate at the Haas School.

She investigated the corporate performance of more than 1,500 companies across three main categories of environmental, social and governance. Key findings were that companies with more women on their board of directors are more likely to:

The emerging evidence is that women on a company’s board of directors are
helping their companies better serve their equity owners’ interests through
enhanced environmental, social and governance risk-positioning.

As explained by WECAN:

“Women are rising with fierce resolve, because what’s happening at the
national and international policy level on climate change is not equivalent to
the urgency we are facing. We are demanding no more delays and calling for
strategic action that addresses root causes and systemic
change.”

Women are important to the future of our planet. Advancing the role of women could very well prove to be the crucial element that helps us to build a critical mass of ecologically aware people. Any serious environmental advocate needs to appreciate the value of also advocating for women’s rights.

Oil Leaking from a Sunken Ship Off the Coast of Newfoundland

Oil Leaking from a Sunken Ship Off the Coast of Newfoundland