PTC is Dead: Obituary for the Production Tax Credit 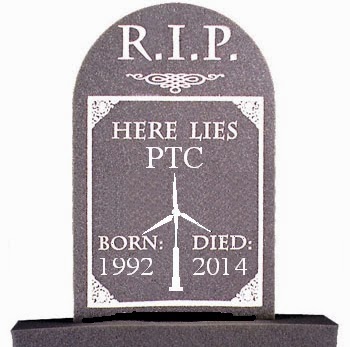 It looks as though the tax credit for the wind industry is officially dead. After two decades, the federal government’s wind energy stimulus incentive known as the Production Tax Credit (PTC) has succumbed to GOP pressure. It was born under the Energy Policy Act of 1992 and it died on January 1, 2014 due in large part to Republican pressure to reign in government spending. It is no coincidence that the PTC was killed in an election year. In the 2014 midterms, Republicans are expected to focus on curtailing government spending as a primary campaign issue.

For two consecutive years the credit has teetered on the brink. In 2012 it looked as though the credit would not be extended, but in a last minute deal it was resurrected. Both at the end of 2012 and 2013 wind producers across the country scrambled to qualify for the PTC before its expiration. However, unlike the reprieve of 2013, the credit is unlikely to be resuscitated in 2014.


Although there are some proposals to bring it back to life they are dead in the water. Many in the wind industry acknowledge that the PTC was conceived as a bridge to the future and never meant to be permanent.

The PTC was undeniably successful. Wind energy has more than tripled since 2008 and a record 12,000 megawatts of US wind farms were under construction by the end of 2013. Despite the success of the PTC, many Republicans argue that we need to significantly reduce government spending.

Others argue that a staggered phaseout of the PTC would have been preferable. The idea is to reduce the current rate of 2.3 cents per kilowatt-hour of produced energy to 1.5 cents. This staggered approach is unlikely to fly. All forms of government stimulus spending are political liabilities as we approach the midterms of 2014. It would appear that Republicans have yet again put doctrinaire conservatism ahead of the national interest.