Air Purifying Hardwood Floor is Revolutionary but is it Safe?

by Richard Matthews
in Buildings, Technology
0 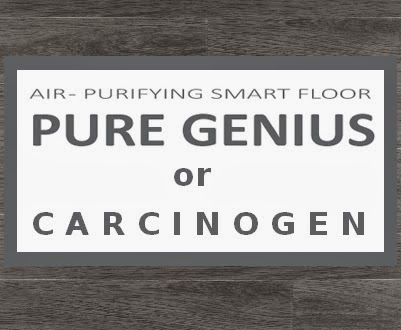 There is a new flooring product on the market that according to its manufacturers can purify the air, but is it safe? Hermetically sealed homes may be energy efficient but they may also lock in airborne toxins. According to a new WHO report, 4.3 million deaths in 2012 are attributable to indoor air pollution. This new product could be a revolutionary way of improving indoor air quality. However, this air purifying hardwood floor is the first of its kind, so there is no history that can be studied.

The new flooring product is called Pure Genius® smart hardwood flooring and it is manufactured by Lauzon Distinctive Hardwood Flooring one of the leading hardwood flooring manufacturers in North America. The company distinguishes itself through its environmental commitment which includes “sustainable resources” and other initiatives. On their website they list the conversion of wood pellet residue into fuel as one of their environmental initiatives.


According to the manufacturer the air purifying characteristic of this flooring is activated by natural or artificial light and by the movement of air. It continuously breaks down airborne toxins, creating a constant supply of pure air in the home.

Lauzon claims that its studies show that the air in rooms installed with Pure Genius is up to 85 per cent cleaner than spaces without the flooring.

“Many people don’t realize the extent to which the air-tight environments in today’s homes contain pollutants and toxic contaminants, such as formaldehyde emitted from furniture, building materials and common household products,” said Priscilla Bergeron, Communication Manager of Lauzon, explaining that indoor air is often five to 10 times more polluted than outdoor air. “Poor air quality in the home causes build-up of bacteria, viruses and moulds, and may lead to allergies, fatigue and respiratory problems like asthma.”

She added that, after 30 days, rooms installed with Pure Genius flooring have been shown to have a formaldehyde level of only five parts per billion (ppb), compared to 16-32.5 ppb found in a typical home. What’s more, Pure Genius helps reduce household odors such as cigarette smoke, pet urine and lingering cooking smells.

Highly washable and resistant, the flooring enables hardwood cleaners to disperse better, so “not only is the atmosphere cleaner, but the actual floor itself is cleaner,” Bergeron said, adding that the technology works for as long as the finish lasts.“The purifying effect is so strong, that for an average 1,377-square-foot home installed with Pure Genius, it’s like having three trees in your home,” Bergeron said.

Titanium dioxide is among the top fifty most commonly produced chemicals in the world and it is commonly used in paints, plastics, papers, inks, foods, toothpastes, cosmetics, skin care products and sunblock.

According to the evidence, high concentrations of pigment-grade (powdered) and ultrafine titanium dioxide dust caused respiratory tract cancer in rats exposed by inhalation and intratracheal instillation. However it should be noted that the human studies conducted so far do not suggest an association between occupational exposure to titanium dioxide and an increased risk for cancer.

It should further be noted that the evidence linking titanium dioxide is less than conclusive. The definition by the IARC for Group 2B possibly carcinogenic to humans is as follows:

The evidence for a carcinogenic link is based on a rat study by Lee, Trochimowicz & Reinhardt (1985), which according to some investigators may not be an analogous species to assess human impacts.

Other scientific reviews have not borne out a safety risk from titanium dioxide including a 1969 Rome study by the World Health Organization and the Food & Agriculture Organization of the United Nations. The U.S. Food & Drug Administration (2002) also failed to find a link.

Guide – Environmental, Health, and Safety
The Passage of Health Care and the Implications for the Environment

The Environmental Impacts of 9/11

Recycling or Reclaiming Water: A Sustainable Solution for Industry

Factors Detracting from and Contributing to Carbon Capture

CDR is essential for climate mitigation however, there are a host of factors that are impeding its implementation. One of the impediments to deploying CDR is cost related to the...

The Role of the Fossil Fuel Industry in Carbon Capture

The fossil fuel industry has played a pioneering role in advancing carbon capture research. This includes carbon capture and utilization (CCU) for fuel, and enhanced oil recovery or (EOR) that...

Recycling or Reclaiming Water: A Sustainable Solution for Industry

Keystone XL Pipeline Finally Cancelled and Others Will Follow