by Richard Matthews
in Business and Economics, Leadership, Other
0 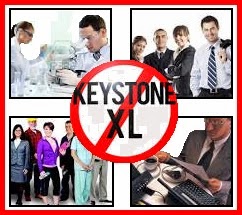 On March 7th 200 business leaders joined over 2 million people to tell President Obama and Secretary of State John Kerry to reject the Keystone XL tar sands pipeline. Exactly one month later (April 7th) more than 100 scientists and economists sent a letter saying that the Keystone is not in the national interest and they further demanded that it must be stopped.

Not only will rejecting the pipeline send a powerful symbolic message, but it will also achieve the all-important objective of reducing greenhouse gas (GHG) emissions. If it is allowed to go through, the keystone would ship 830,000 barrels per day of carbon-intensive tar sands from Alberta to refineries on the US Gulf Coast. According to some scientific assessments if the tar sands are exploited to their full capacity this will mean “game over” for efforts to address climate change.

As of the end of the 30 day comment period on March 7th, the State Department had received more than 2 million comments from Americans and people all over the world calling for the rejection of the Keystone XL tar sands pipeline. The Keystone XL would lead to an expansion of tar sands production, and this would significantly increase GHGs. It, therefore, fails the climate test that President Obama set for the pipeline.

The public has repeatedly protested against the pipelines, in total there have been more than 280 vigils organized in almost all 50 states.

On March 7 more than 200 business owners and venture capitalists sent a letter to Secretary of State John Kerry stating that the proposed Keystone XL pipeline is not in US economic interests.  The letter states that the costs of the pipeline far outweigh the benefits. They further state that the low cost of ferrying the tar sand will increase the exploitation of this dirty source of fossil fuels. A point that squarely refutes the State Department’s contention that the oil sands will be exploited with or without the pipeline.

As explained in the letter, “Markets rely on both price and policy signals when making investment decisions…While increasing prices for crude oil have
driven interest in further development of tar sands, this development is not inevitable without continued high prices and policy support.”

The letter was sent out by NRDC affiliate E2, a non-profit, non-partisan group of business leaders and others who promote sound environmental policies that drive economic growth. They claim that their members have collectively created more than 570,000 jobs while managing more than $175 billion in venture and private-equity capital.

The letter is signed by prominent members of Silicon Valley including those involved with cleantech as well as executives at Apple, Oracle, Facebook and Google. Other notable signatories include Bob Fisher, the chairman of GAP, and Tedd Saunders, the operator of East Coast hotels.

The most startling claim in the letter is the suggestion that the Keystone XL will cost the American people $100 billion over its lifetime.

As pointed out in the most recent AR5 report, climate change is already costing the world’s economies billions of dollars and leading to resource shortages and other disruptions including those attributable to extreme weather events.

The April 7th letter from leaders in science and economics tells the Obama administration that we must tackle climate change and the first step is to stop using “disproportionately carbon-intensive energy sources like tar sands bitumen” which is 17% more greenhouse gas emissions than conventionally produced fuels over their full lifecycle.

The letter points to significant air and water pollution, health risks as well as dangers associated with transporting oil by pipe. It goes on to say that “over the 50-year expected lifespan of the pipeline, the total emissions from Keystone XL could amount to as much as 8.4 billion metric tons CO2e. These are emissions that can and should be avoided with a transition to clean energy.”

Some of the signatories include

Business leaders, scientists, economists, and average people from around the world are speaking with a shared voice that urges the Obama administration to reject the Keystone XL. The President is expected to make a decision on the pipeline in the coming months.

Patagonia is an iconic outdoor gear maker, that has holistically integrated sustainability into their DNA. At Patagonia, there is no contradiction between saving the world and the bottom line. This billion-dollar...

You cannot be faulted for failing to notice the long list of environmental wins that occurred in 2021.  Good news...