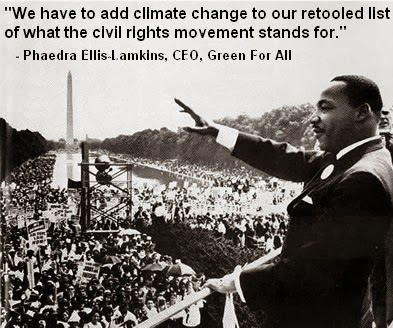 Today is the anniversary of the passage of the landmark Civil Rights Act which was signed into law 50 years ago. The half century celebration pays homage not only to race, but also to progress on gay rights and the equality of women. To that list of civil rights we should be adding environmental issues.

As reviewed in an August 2013 article in the Guardian, Phaedra Ellis-Lamkins, the chief executive officer of Green For All made the point the Hurricane Katrina highlighted issues of injustice and inequality.

As she explained, “Climate change isn’t just an environmental issue; it’s about keeping our communities safe. It’s a matter of justice. Because when it comes to disasters — from extreme temperatures to storms like Katrina — people of color are consistently hit first and worst.”


In 2013 Green for All marched in Washington DC with tens of thousands of people from across America to observe the 50th anniversary of the 1963 March on the Nation’s capitol. They marched against the recent attack on voting rights. They demanded justice in the face of Stand Your Ground laws and racial profiling. They marched to raise awareness on unemployment, poverty, gun violence, immigration, and gay rights. And they called for action on climate change.

As explained by Ellis-Lamkins, “African-Americans living in L.A. are more than twice as likely to die in a heat wave as other residents in the city.” He also showed how people of color are more likely to suffer the ravages of pollution, citing the fact that 68 percent of African-Americans live within 30 miles of a toxic coal plant and one out of six black kids suffers from asthma, compared with one in 10 nationwide.

He said that efforts to combat climate change are part of Martin Luther King’s famous 1963, “I have a dream” speech. “This is Dr. King’s dream reborn. And fighting climate change helps get us there” he said. “We need to respond to climate change today to ensure safe, healthy, prosperous lives for our kids tomorrow.”

“The solutions to climate change won’t just make us safer and healthier — they are one of the best chances we’ve had in a long time to cultivate economic justice in our communities. Clean energy, green infrastructure, and sustainable industries are already creating jobs and opportunity,” he said.

For people of color creating employment and improving the environment are fundamental issues of human rights.

“That’s why we have to add climate change to our retooled list of what the civil rights movement stands for,” Ellis-Lamkins said.