The Anti-Environment Influence of 3 out of 4 Koch Brothers 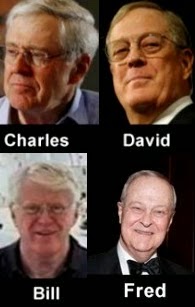 There are three Koch brothers who have amassed a long track record of environmental malfeasance and political interference. Well known oil billionaires Charles and David Koch use their fortunes to misinform, manipulate and protect their corporate interests. They are estimated to be worth about 25 billion each. This diabolical duo own Koch Industries, the second largest privately owned corporation in the US. They also have a lesser known brother named William (Bill), he is worth a mere 4 billion but his business interests include petcoke which is some of the dirtiest petrochemical byproducts.

Bill Koch owns the Florida based Oxbow corporation, the world’s largest petcoke trader. They donated $4.25 million to GOP Super PACs in 2012, making it the one of the largest corporate donors to super PACs. Oxbow also spent over $1.3 million on lobbyists in 2012.


In addition to the disinformation and lobbying front groups run by the Koch brothers, Charles G. Koch is now looking to get into the media business. Koch is allegedly looking to buy the Tribune Company’s eight regional newspapers, including The Los Angeles Times, The Chicago Tribune, The Baltimore Sun, The Orlando Sentinel and The Hartford Courant. This will increase his capacity to disseminate misinformation and further the reach of Koch Industries propaganda empire.

A fourth Koch brother, Fred sold his share of Koch Industries and obtained an MFA. He is a longtime supporter of the arts.

Charles, David and Bill have each demonstrated a powerful capacity to wreak havoc on the environment. They also use their money and influence to subvert the democratic process. However, as Fred demonstrates, the pathological disregard for the planet exhibited by three Koch brothers, is a trait not shared by all the siblings.

Rhino Horn Economics: The Perils of Putting a Price on Nature

Harvard Faculty Wants the School to Divest from Fossil Fuels

Harvard Faculty Wants the School to Divest from Fossil Fuels