Supreme Court Ruling is an Invitation to Pollute 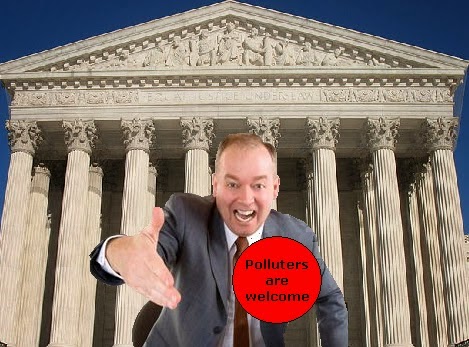 A US Supreme Court ruling earlier in June is a virtual green light for industrial polluters. The failure to hold polluters accountable sets a dangerous precedent. The ruling protects CTS electronics from assuming responsibility for its contamination of a North Carolina community.

The Environmental Protection Agency has verified that there are unsafe levels of trichloroethylene (TCE) in the air. TCE, a known carcinogen and neurotoxin, was among the chemicals used at the CTS facility.


In a 7-2 vote, the case of CTS Corp. v. Waldburger blocks a group of landowners in Asheville, North Carolina from pursuing compensation for property and health damage associated with toxic chemicals that orginated in a former CTS electronics plant.

The plant was closed and sold in 1987 and according to a North Carolina statute the company ceases to be liable a decade after its last act causing contamination. North Carolina is one of only four states that limit the period a company can be held liable for its pollution. The problem with the ruling is that some forms of environmental contamination take more than 10 years to manifest in the health of local residents.

According to federal law the time limit for liability is ten years from the point at which a victim first learns of the contamination that likely caused his or her injury.

In 2013 the US Court of Appeals ruled that the federal law overrides the state law, however, this law was reversed by the recent Supreme Court decision.