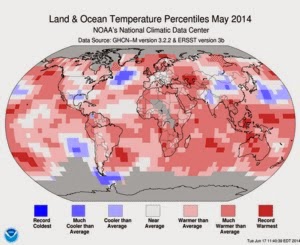 May was the hottest month in recorded US history. According to the National Oceanic and Atmospheric Administration (NOAA) land and ocean temperatures in May 2014 were the hottest combined average temperatures every recorded for the month.

Four of the five warmest months of May on record have occurred in the last five years. Global sea level temperatures tied the highest departure from average for any month on record.

New Report on the Costs of Delaying Action on Climate Change