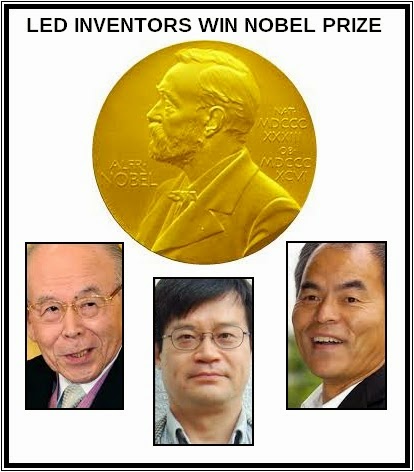 The Nobel Prize for Physics has been awarded to the inventors of light emitting diodes (LEDs). This invention has revolutionized lighting both by saving energy and reducing costs. On October 7, the Royal Swedish Academy of Sciences in Stockholm announced that the 2014 Nobel Prize in physics was going to Isamu Akasaki, Hiroshi Amano and Shuji Nakamura, the three scientists who helped develop blue LEDs.

LEDs have been around for more than 30 years, but in the 1980s, diodes could only emit red or green light. It wasn’t until the 1990s, that Nakamura helped develop the first high-brightness blue LED, which is a far more functional than red or green. While called a blue light, it has been developed so that it appears white.

It is not an overstatement to say that LEDs have changed the world for the better. They are far better for the environment as they do not contain mercury like florescent lights. They are a key component of efforts to combat climate change as they require far less energy than traditional lighting, they last a very long time and they are readily paired with renewable sources of energy like solar panels and small batteries.

LEDs have, “triggered a fundamental transformation of lighting technology,” explained by the Nobel committee, “The LED lamp holds great promise for increasing the quality of life for over 1.5 billion people around the world who lack access to electricity grids: due to low power requirements it can be powered by cheap local solar power.”

LEDs are ideal for those who do not have access to an electrical grid and still burn either wood or gas for lighting. This is both inefficient and environmentally destructive, not to mention harmful to human health.

Approximately 25 percent of energy requirements go into lighting in most industrialized countries, so LEDs can be a powerful source of energy savings. In the US, 17 percent of electricity consumption comes from lighting. The point is that it is not only the developing world that can benefit from significant decreases in energy use by leveraging the efficiency of LEDs.

LEDs are 15 times more efficient than incandescent bulbs and 4 times as efficient as compact fluorescent bulb (CFL). Even more impressive is the fact that LEDs continue to get more efficient. They are the next evolutionary step in lighting and they are a quantum leap forward in our efforts to get more light with less energy.

Incandescent lightbulbs are extremely inefficient only 2 percent of the energy is given off as light the rest is spent as heat. LEDs convert energy directly into light making them far more efficient.

LEDs get about 300 lumens of light from LED bulbs for every Watt of electrical power used, whereas compact fluorescent bulb (CFL) get only 70 lumens and incandescent lights get just 16.

Not only are they more energy efficient they also have a much longer life span than traditional incandescent bulbs. According to some estimates they can last 10 times longer (2 years for traditional bulbs and up to 20 years for LEDs).

As reported in a Bloomberg article, the lighting industry is huge and LEDs are surging fast. Royal Philips NV to be worth about $75 billion. LED lamps accounted for 15 percent of global lighting sales in 2013, up from 4 percent in 2009, according to Euromonitor International, a market research company. In Asia, LEDs are now 20 percent of the market.

“If you look at Philips’s guidance, they’re saying that traditional lighting will decline 10 percent per annum, where LEDs will grow 20 percent to 25 percent per annum,” said Robin van den Broek, an Amsterdam-based analyst at ING Bank.

There are also a number of new markets that have been created by LED this includes parts of the developing world like Africa. In 2005 a Tokyo court ruled that LEDs could be worth 60 billion yen.

The cost of providing a given amount of light has dropped 3,000-fold since the early 1800s. The initial obstacle to widespread adoption has been the upfront cost, but the price has been steadily falling and the ROI makes them a sound investment as they are able to pay for themselves within a couple of years in most instances.

LEDs are not only for interior and exterior lighting, they are now commonly used in streetlights and traffic lights, computers and smartphones. Going forward it is likely that LEDs will be the dominant form of lighting.

LEDs may help advance education for those who need it most. Being able to read a book at night may be something people in the west take for granted, but in the developing world this is difficult or impossible in some places. The introduction of LEDs could help to advance the educations of millions around the world by giving them access to reading lights without having to be plugged into an electrical grid.

Olle Inganaes, a professor of biomolecular and organic electronics at Linkoeping University in Sweden, said today at a press conference held by the science academy in Stockholm. “So having much more light for much less electricity is going to have a big impact on our modern civilization.”