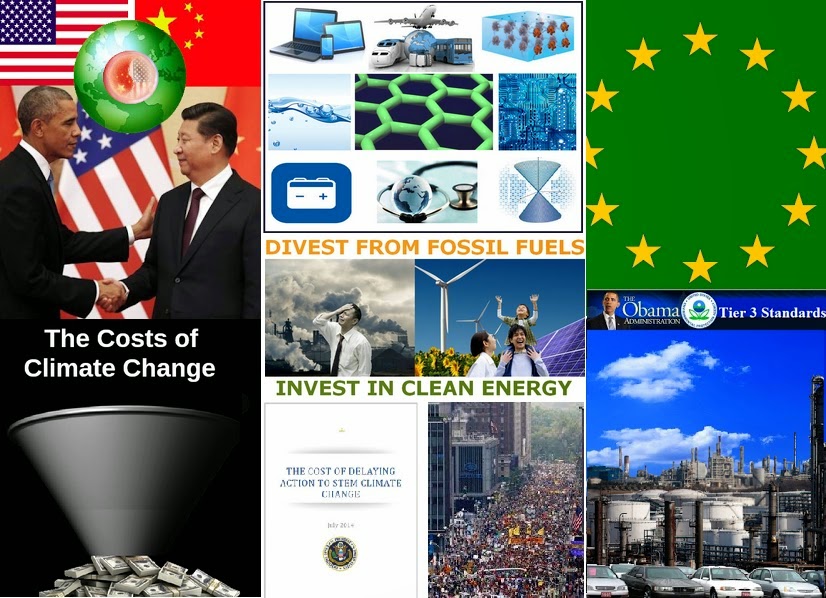 Here are some of the most inspiring and transformative climate stories of 2014. Although global temperatures continue to increase and levels of atmospheric carbon are around 400 ppm, we have seen some reasons to buoy our hope over the course of the last year. People, companies, cities, states, countries, and regions are beginning to wake up and face the challenge of climate change.

There are some technological innovations (like graphene) that may help us to transition to a low carbon. However, even without such game changing disruptive innovations, in 2014 it became apparent that we can still make the transition with existing technologies and at reasonable costs. In 2014, both the Risky Business report and a White House report, illustrated the cost of delaying action.


China and the US have signed an agreement to lower emissions and Europe has shown world leading leadership. Their leadership is important as together they account for more than half of all global emissions of energy related CO2.

The EU already has an emission reduction plan in place. The EPA’s Clean Power Plan and vehicle emissions standards go a long way to reducing US carbon emissions.

We have also seen serious progress to reduce short lived pollutants like methane which is responsible for 25 percent of the current warming. The technology to reduce methane emissions in the extractives industry already exists.

Energy efficiency and the idea of putting a price on carbon (eg California and the RGGI states) are other powerful ways of combating climate change that have gained some traction this year.

Perhaps the most important and inspirational climate story has to do with the powerful new climate movement that is emerging. This new movement was in evidence in September at the People’s Climate March in New York City. Not only did hundreds of thousands came together in Manhattan, there were also 2,600 events in 162 countries around the world.

We also saw growing interest in the campaign to divest from fossil fuels and invest in clean energy. This is crucial as there is no way we can reduce emissions without substantially reducing our dependence on fossil fuels.

In 2014 we saw evidence that from a social, scientific, economic and political point of view it is possible to reverse our perilous trajectory.