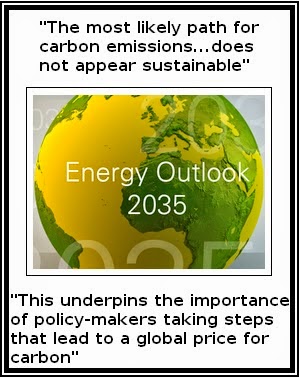 One of the world’s largest oil companies has stated that we have to price carbon to curtail carbon emissions.

The science is clear and there have been a vast number of warnings coming from a wide variety of sources including, AGU, IEA, IPCC, PwC, World Bank, and the World Meteorological Organization stating that our current trajectory is catastrophic. Now even those responsible for the problem are coming forward with warnings of their own.


BP’s warning foreshadows demands that will be made for global emissions reductions at the forthcoming COP 21 climate talks at the end of the year in Paris. The UN and many other scientific bodies have repeatedly said that we must keep global temperatures from rising more than 2 degrees Celsius above preindustrial times to avert the worst impacts of climate change.

Many people think that the only way we can curtail climate change is through some forms of carbon pricing scheme and it would appear that BP agrees. BP has warned that atmospheric levels of CO2 from burning fossil fuels are unsustainable in the absence of global pollution regulations. The BP report predicts that CO2 emissions will increase by 1pc per year, or 25pc in total, through to 2035.

“The most likely path for carbon emissions, despite current government policies and intentions, does not appear sustainable. The projections highlight the scale of the challenge facing policy makers at this year’s UN-led discussions in Paris. No single change or policy is likely to be sufficient on its own,” said BP chief executive, Bob Dudley. “This underpins the importance of policy-makers taking steps that lead to a global price for carbon, which provides the right incentives for everyone to play their part.”

The author of the report, BP’s new chief economist Spencer Dale also acknowledged the volatile nature of oil prices from here on in.

“After three years of high and deceptively steady oil prices, the fall of recent months is a stark reminder that the norm in energy markets is one of continuous change,” said Mr Dale.

This webinar on soil technologies will take place on December 1, 2020, 2:00 PM-3:15 PMET. The Unearth the Possibilities webinar will present on planned research in areas like precision agriculture,...

Corporate America has come to the realization that it cannot afford to ignore the wave of voter suppression bills in...

Conservative Climate Disinformation and the False Gods of Capitalism