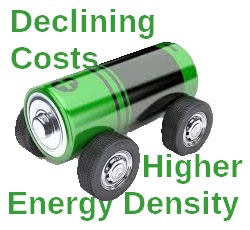 The declining cost of batteries used to power electric vehicles (EVs) is critical to their widespread adoption. Battery price points are declining rapidly and 2015 was a groundbreaking year for stationary batteries and EV battery price points hit a new low in 2015. Batteries are the most expensive component of an EV, they have already declined by 35 percent and they are declining at an annual rate of around 20 percent.

Battery cost and energy density (range) are closely connected to adoption rates. Each gallon of gas creates 20 pounds of CO2 so EVs are an essential part of the transition away from fossil fuels and reducing global emission.

While we are already seeing falling costs, in the wake of the COP21 agreement governments are expected to create new incentives and regulations that will further augment the sales of EVs.

While electric vehicle demand has soared in recent years but it is still way below the target set by President Obama early in his first term. However, the President’s predictions notwithstanding, current levels of EVs have surpassed the predictions of industry insiders. The US now has 30 percent more electrified vehicles than 2008 estimates predicted.

By the end of 2014, more than 700,000 total plug-in vehicles (plug-in hybrids and pure battery electrics) had been sold globally, that is up 80 percent over the 400,000 that were sold in 2013. In 2015 consumers had dozens of models of electric cars and many more are on the way. The growth in EV sales can be attributed in large part to the decreasing costs of EV batteries. The range of these new batteries is also improving as a function of improved energy density

The point at which EVs achieve price parity with traditional vehicles ranges from $100 per kilowatt hour (KWh) to around $300 per kWh of storage capacity. Some have predicted that we will get to the $300 point by 2020, but recent studies show we are already there.

Another study referenced by Green Car Reports indicates that the current price point for Lithium-ion cell is around $496 per kWh, representing a 60-percent drop since 2010. According to this study battery prices will reach $175 per kWh in five years.

A 2015 study by Björn Nykvist and Måns Nilsson, indicates that the cost will fall to $230 per kilowatt hour in the next few years. This study indicated that battery packs for electric-cars are already cheaper than previous estimates for 2020. in 2013, the International Energy Agency (IEA) estimated that we would not see prices fall to $300 per kilowatt-hour until 2020.

The cost of EVs have declined by 14 percent each year between 2007 and 2014 and the price for EV batteries has fallen from $1,000 per kWh to as low as $140 per kWh in this time. The cost of battery electric vehicle (BEV) leaders, like Nissan’s LEAF and Tesla’s model S. are already on a par with internal combustion vehicles at $300 per kWh. The study says that we will see a paradigm shift when the price for EV batteries falls to $150 kWh precipitating the widespread adoption of EVs. Companies like Sakti3 are targeting a cost of just $100 per kilowatt-hour for its solid-state cells.

Even without technological advances we can reduce battery costs further with improvements in manufacturing and economies of scale. A partnership between Tesla Motors and Panasonic illustrates the importance of scaling battery technology to reduce costs. Their $5 billion plant will produce 500,0000 battery packs every year reducing the price by 30 percent.

The study says that “the cost reduction following a cumulative doubling of production, is found to be between 6 and 9 percent, in line with earlier studies on vehicle battery technology.”

While EVs are getting cheaper combustion engine vehicles are getting more expensive. As explained in a Green Car Reports article, “The cost of conventional gasoline vehicles has been projected by the U.S. National Highway Transportation Safety Administration to increase about $3,000 in real dollars from 2012 to 2025 to meet increasingly stringent corporate average fuel-economy standards.”

Overall the trend towards lower costs and higher density bodes well for the future of electric vehicles.

In this May 4, 2015 video EV expert Chelsea Sexton reviews the state of battery prices and technology.